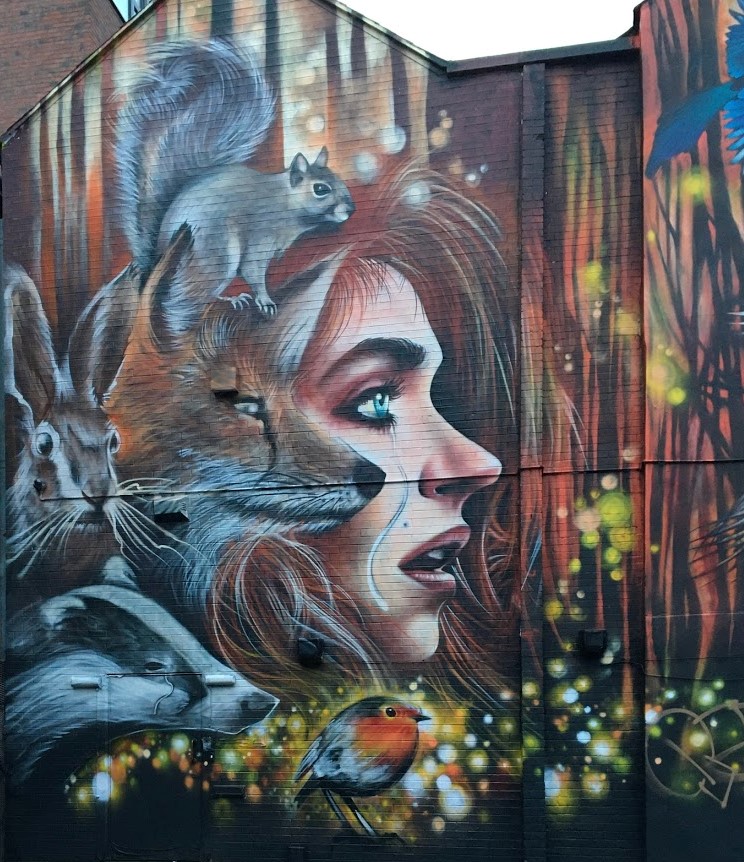 Why the Northern Quarter is mint!

“Come for the street art, stay for the food and drink. The Northern Quarter is a hip and chill area of Manchester that for many (including me) is their favorite part of the city. ” , is how one American reviewer on Skyscanner describes their experience of Manchester’s Northern Quarter.

Having spent a fabulous birthday afternoon and evening in this vibrant area of the city, I would have to agree.

A birthday spent in the Northern Quarter

This Saturday, I tipped over into the wrong side of my 40’s. I am now 46. Having long been under the delusion that I surely don’t look as middle-aged as others of my age bracket, ( pretty sure I do!) I was determined to have a great afternoon out. Being in my mid-40s is indeed something worth celebrating, as my friend reminded me, “It’s better than the alternative!” She has a point.

I have long been someone who stubbornly veers away from following the herd. If I like something, but it then becomes very popular or mainstream, I am no longer interested. Is the Northern Quarter as varied and interesting as I have heard?

According to Wikipedia, ” The Northern Quarter (N4 or NQ) is an area of Manchester city centre, England, between Piccadilly station, Victoria station and Ancoats, centred on Oldham Street, just off Piccadilly Gardens. It was defined and named in the 1990s as part of the regeneration and gentrification of Manchester.

As you leave Piccadilly Gardens and the major high street chains and disappear down the side streets towards Oldham Street, a fantastic array of independent boutique shops, bars, cafes and comic book stores awaits. If you want something a bit different, this is the place. It is vibrant with street art, relaxed and interesting.

It would be remiss of me to not begin with Afflecks Palace. Described as ” An emporium of eclecticism and a totem of indie commerce” on its own website, Afflecks is a wonderful mix of tattoo shops, craft shops, comic bookstalls, and hippie and indie fashion. The Manchester Shop at the entrance offers a fantastic selection of high-quality Manchester themed merchandise.

I was drawn to the Manctone, Manchester colour chart poster. Particular favourites are Gravy, Pankhurst and Mint. I could have bought much more though, with a selection of Manchester bee-themed gifts, gorgeous bags and mugs, placemats, T-shirts and posters highlighting Manchester’s famous 90’s Indie scene. Pop in, there is lots to find!

At lunchtime, we called into Wilson’s Social, on the corner of Oldham Street and Hilton Street. It might well have been more appropriate to say “On Oldham and Hilton” as from all appearances, we were in New York.

From a great vantage point of a window seat, we were able to enjoy our lunch and watch the filming of retake after retake of an episode of The Crown, season 4. Each time the NYPD motorbikes would cruise down the street, followed by a New York police car and then a royal limousine. Apparently it contained actress Emma Corrin as Princess Diana, but all I managed to see was the back of a blonde coiffed head.

Filming in the Northern Quarter.

The Northern Quarter has become a very popular location for filming, most notably for “Peaky Blinders” and the most recent Spiderman film, “Morbius”. To be fair, I would have loved a sighting of Cilian Murphy, Tom Hardy or Jared Leto, but the spectacle was still very interesting all the same. You never know who might pop up.

Shopping in the Northern Quarter

Having grown up in Somerset and often visited the local town of Glastonbury as a teenager, I would compare it very much to the shopping in Northern Quarter. This is where you come to discover wonderful independent retailers and find something a little different from the run of the mill high street fashions.

Not so fast fashion!

Shops offer a variety of small independent clothing brands, jewellery, bags and organic bath products. I was particularly impressed with Thunderegg, which began within Afflecks Palace and now has a branch on Oldham Street. Their “About Us” section of their website states, “We sell women’s clothing, ranging from vintage-inspired 50’s frocks and 1940s style tea dresses to clothing from current and contemporary labels such as Glamorous, Sugarhill Boutique, Run & Fly, Noisy May, Compañia Fantasica and many more!”

I adore my zipper bag from BlueQ. which I bought in Thunderegg. They also have fantastic bags, socks and gifts!

Other great shops include Blue Rinse, which sells reworked clothing and new clothes from vintage fabrics. It is making its own stand against the environmental impact of fast fashion we see today. Oi Polloi, sells classic and contemporary menswear and has even been labelled ” Manchester’s finest boutique”, by GQ magazine.

If comic books are your thing, the Northern Quarter should be your destination! Look for shops such as Forbidden Planet, Magma and Tokyo 15. Marvel, Pokemon, Manga and Star Wars, Harry Potter and Doctor Who is all to be found here.

Bars and restaurants in Ancoats and the Northern Quarter.

We decided to head to Ancoats for more drinks and dinner.

Ancoats was once the centre of the Manchester cotton industry and over the years it declined into run-down mills and desolate buildings. Since the late 1990’s it has undergone regeneration and there are many fantastic bars and restaurants emerging. It is great to see the life coming back into an area which was once the very source of the city’s wealth.

Beautifully refurbished terraced houses sit among industrial buildings in different stages of redevelopment and there are many fantastic bars and restaurants emerging. It is great to see the life being breathed back into an area, which was once the root of Manchester’s wealth.

The Edinburgh Castle Pub re-opened last autumn. According to the Manchester Evening News, The abandoned Victorian pub, which dates back to 1811, will be managed by the same team behind the Northern Quarter’s popular Asian-inspired restaurant and cocktail bar. ” Cottonopolis. It is a traditional pub, which felt very cosy and welcoming on a rainy February night. The restaurant upstairs is called “The Cutting Room” after the room which would have been used to cut cloth patterns. We didn’t eat here, but we will be back!

Across Cutting Room Square is a bar called “Jane Eyre”. I wondered at the time why the bar was named after my favourite Bronte novel. The bar’s website informs you that in fact, it is named after the mum of the two bar owners. Serving “cocktails, beers and small plates“, the bar was extremely relaxed and a great place to stop for a drink.

We ate at Canto, a Mediterranean tapas restaurant. The selection of tapas was a little more varied than many I have seen, including octopus, braised pigs cheek and delicious jamon croquestas. Again, the restaurant was very welcoming and had a great atmosphere. One great tip would be to come on Saturday and Sundays between 12 pm and 6 pm and sample The “Tipsy Tapas”. You can sample 3 select sample dishes and enjoy unlimited bellinis, cava or house wine for 90 minutes. Worth heading out a bit earlier!

Would I spend another birthday in the Northern Quarter?

I can emphatically declare that the Northern Quarter is my favourite area in the city. I much prefer the small independent shops and bars to the larger chains in town. It offers such variety for retail and dining and you know that you are supporting a small business in many cases.

As a freelance web designer and therefore small business, I am bound to give a cheeky shout out to any other small businesses. Should you require help with your own small business website, get in touch!

This site uses Akismet to reduce spam. Learn how your comment data is processed.

We use cookies to ensure that we give you the best experience on our website. If you continue to use this site we will assume that you are happy with it.OkPrivacy policy