Dyslexia – a challenge to overcome or an opportunity to explore?

As a toddler, our son could complete a huge jigsaw puzzle in record time. He loved to build railways and create his own little towns out of Felix cat boxes, PVA glue, and tissue paper. He had a bizarrely accurate memory for directions and relished a map. He delighted in helping his dad problem solve any job around the house and needed to know how things worked. To us, he showed great promise as an inquisitive, enthusiastic little learner. His ability to memorise animals and details of their lives, the names of dinosaurs, and as he grew older a fascination with history made us so proud of his desire to learn. He now loves to chat endlessly with my dad, with whom he shares his love of history and reenact American civil war battles with Gramp’s soldier set. Gramp even taught him a rebel yell. “yip, yip, yip!” He is that child who absorbs information like a sponge. 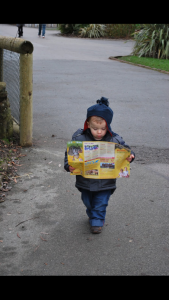 Jumping through the hoops.

Then the demands of primary school and specifically the educational requirements started under Education Secretary, Michael Gove, crossed his path. Ben, thankfully attends a wonderful, nurturing primary school. The staff recognise the strengths of each pupil and encourages them. However, nothing could prevent Ben from being categorised according to his ability to write neatly on a line, space his words properly, write his letters the correct way round, and read with fluency. Ben was 5 when these first challenges began to identify him as different. A year or so later, my heart broke for him when he told me, ” I can’t spell, I’m stupid!”

My son isn’t stupid. He is bright, kind, amusing, quirky, empathetic, creative, and curious with a breadth of knowledge to rival any “normal ” child. But he is quite significantly dyslexic. Ben did pass the phonics screening test at the age of 6, but this does not mean these sounds mean a single thing to him. He simply is not able to recognise and then utilise these in his writing. He can do very well in a spelling test, but the words are gone from his memory by the end of the day. Ben did well enough on his KS1 SATS, and although he certainly writes more neatly, his struggle to track a page and therefore write tidily or read aloud smoothly always represents a struggle to him. Throughout his primary years, Ben has always received the highest marks for effort. He excels in topics like history, geography or science. This year his Yr 6 teacher expressed what creative, well-written stories he writes if you can get past the spelling. To her credit, she is very happy to do so and acknowledges that the world my now 10-year-old will enter, has spell check and computers. Yes, it’s important to spell correctly and write neatly, if you can, but is that more important than what you say?

Jumping through the right hoops.

In September, my boy will start high school and we are in the midst of the hugely difficult decision of selecting a high school with him. Our area, in Greater Manchester, runs a selective system. The old 11+ style entrance exam lingers on with selective grammar schools. We did not debate for very long to decide that Ben was not going to sit these examinations. With his dyslexic talent for spotting patterns, he may well have excelled at the non-verbal reasoning, but even with extra time allocation, the pressure of tutoring, on top of his usual day at school meant that we decided it was not for him. Ben’s year 5 teacher, who we believe is solely responsible for his passion for reading (yes he loves to read), told us he works three times as hard to achieve as well as he does. He didn’t need more stress. To us, maintaining his confidence mattered more. Fortunately, we have wonderful schools here and the variety of curriculum available to Ben will help us make the final decision. A Ted Talk by Kate Griggs of Made By Dyslexia , explains how our schools have a role to play in recognising the abilities of dyslexic children

Does dyslexia limit your potential?

In perfect timing, an article by Chloe Taylor was published this week by CNBC puts the case that ” dyslexics have the abilities to future proof the workforce” The article suggests that the traditional skill sets of “time management, reading, math and active listening were on the decline,” according to the report. Meanwhile, “creative and social skills such as leadership, analytical thinking and technology design were increasingly in demand.” Problem solving, creativity, seeing the bigger picture and empathy are all skills that will see more importance in the future workforce. A quote in the same article by Laura Powell, global head of human resources for retail banking and wealth management at HSBC acknowledges that “These are all areas that dyslexic people are known to excel at.” Reading such things is incredibly reassuring to an anxious mum like me. Dyslexia shouldn’t limit Ben’s potential, as long as the playing field is appropriately levelled for him. Ben can use chrome books, have additional help with literacy and 25% extra time in examinations. He also wears “school vision” glasses, which have made an enormous difference to the issue of eye strain he experiences with tracking a page. Read more about this fascinating eye test and find a practitioner here . We saw the difference in him almost immediately. But more than this, he should be encouraged to follow his passion and play to his strengths.

So what career paths are open to my son and will he have access to all these possibilities? Can you name a famous dyslexic? Having researched this topic in some depth, I can proudly say that I can name a few. Jamie Oliver, Steve Jobs, Richard Branson, Will I Am, Einstein, Picasso, Tommy Hilfiger, George Lucas, Agatha Christie and Tom Cruise. They have all excelled in their chosen career, but do pay attention to their chosen areas. Creativity, problem-solving, seeing the bigger picture, recognising patterns, empathy and people skills. It is no accident that these skills are the basis for their success. They harnessed their talents and followed their passion. A list of dyslexic strengths by Dyslexia Unwrapped helps us see this more clearly. Architecture, sport, engineering, writing, design, IT, web design, culinary arts, marketing and film making. The list is certainly broad.

How to get the best from dyslexic students?

Before web design found me, I was a secondary school teacher for 20 years. I knew about coloured paper, using reading filters and rulers and had heard of Toe by Toe. My powerpoints always had a pastel background. I am now ashamed to admit, that I didn’t know enough. Dyslexia certainly has its challenges to be overcome and Ben knows that he might have to work even harder in some areas, but I was completely unaware of its gifts. Ronald Davis, author of ” The Gift of Dyslexia” wrote, Once as a guest on a television show, I was asked about the “positive” side of dyslexia. As part of my answer, I listed a dozen or so famous dyslexics. The hostess of the show then commented, “Isn’t it amazing that all those people could be geniuses in spite of having dyslexia.” She missed the point. Their genius didn’t occur in spite of their dyslexia, but because of it! Once we knew that Ben was dyslexic, these gifts, which make him exactly who he is meant to be, shone through.

The future for dyslexics.

An article by Nessy Learning, clearly defines these gifts. I believe it is the job of us as parents, the education system and workforce to acknowledge that by overlooking someone, who can’t spell very well, or who struggles to write neatly, we would be excluding a huge, untapped human resource. Yes, my son will have to work much harder in some areas, but surely there is a role for educators and employers to meet their way of learning and acknowledge their strengths. To their credit and showing great foresight, Microsoft became the first company to sign a “Made By Dyslexia” pledge to help people with dyslexia exactly one year ago. Gone are the days of dyslexics being seen as stupid. My son doesn’t have a problem, he is just wired differently and needs a learning style that meets his needs. However, I am still astonished how almost all text is black ink on white paper, which increases the issue of eye strain. How many times is spelling favoured over content? How often do you handwrite anything and who doesn’t use spell check? Given the choice of a piece of text full of spelling errors, which is gripping and cleverly written, or a dull as ditchwater piece without errors, I know what I would choose. My son doesn’t need to be educated separately from his peers, he needs to be able to access the learning differently. Progress is being made and things are beginning to change. Ability Net has some interesting information on Dyslexic aids and apps for students here One in ten people in the UK is dyslexic. However, did you know that 40% of the world’s self-made millionaires are also dyslexic. This article by Richard Branson tells us more. The working world and especially the education system needs to move with the times. Until then, Ben, who agreed I could share this, has us in his corner and if his mum can make a career in web design in her 40’s, he can be whatever he chooses to be.